What rights do gay spouses have in custody battles? 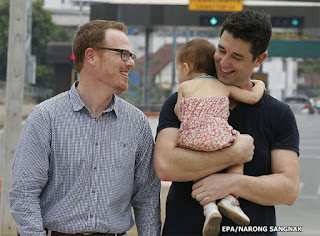 For centuries, the law has struggled with issues surrounding rights of spouses in custody battles.  Of course, until recently, all of these battles have involved heterosexual couples. When a married woman gives birth, who is the father? What rights does a married man have to custody or visitation of young children? What rights does a husband have when children are conceived in a marriage through artificial insemination. All of these questions have been asked and answered for heterosexual couples. Now the same questions are being raised for same-gender couple who are getting divorced.

One of the first cases in Massachusetts to look at some of these issues for same-gender marriages has answered one of these questions. In the case of Della Carte v.Ramirez, question was raised of the rights of the non-biological parent in regards to a child born to the spouse through artificial insemination. The biological mother argued that her spouse had no rights to her child because she was not the father and had no biological connection and that the artificial insemination law, G.L.c. 46, § 4B provided no rights to the spouse because it used language about a child conceived with the “husband's” consent. In this case, the non-biological spouse was granted joint custody over the minor child. In doing so, the court made a ruling that the spouse was the legal parent of the child.

The result in this case established that for questions regarding paternity, custody, and visitation, there should be no difference between the law for heterosexual couples and the law for same-gender couples. In Massachusetts, marriage creates the same rights regardless of the gender make-up of the couple. Laws that use language that create rights for husbands should be interpreted to mean spouses. For Massachusetts, family court disputes should make no distinction based on the gender of the parties. Custody and paternity decisions should be based on concepts such as the best interests of the children without regard to the gender of the parents.

Paternity, custody and visitation in Massachusetts are complicated issues. An experienced family lawattorney can help parties understand the proper issues to raise in custody proceedings.
at May 20, 2014