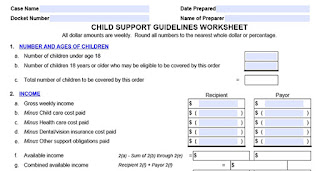 From almost the instant the 2017 guidelines were announced it was discovered that the worksheet contained errors. This resulted in the state pulling the form from the state website for a period of time. Apparently, the first revisions did not correct all of the problems. The state has issued revisions and a new worksheet that takes effect on June 15, 2018.

What do these changes mean? In many cases, the calculator will result in the same amount for child support as the 2017 calculator. I expect that for people one or more children over 18 and other children under 18 that the amount of child support will increase. The only way to find out is to use the new calculator to calculate child support with your facts.

People should consult a family law attorney to understand their rights and obligations under the revisions to the Child Support guidelines.