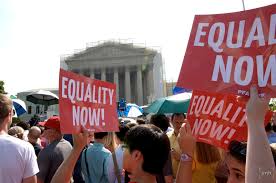 On May 31, 2012, the First CircuitCourt of Appeals unanimously struck down Article 3 of the Defense of Marriage Act (DOMA). DOMA was enacted in 1996 in response to the possibility that Hawaii would legalize same gender marriage. Section 2 of DOMA allows individual states to define marriage as restricted to mixed gender marriages and not recognize same gender marriages from other states. Section 3 defines marriage for Federal law as mixed gender marriage. Obviously, the purpose of DOMA is to deny the benefits of marriage to people of the same gender who want to have a life long relationship. The First Circuit only ruled on Article 3 as the case originated from Massachusetts. Massachusetts allows same sex marriages and recognizes such marriages from other states. As a result, the case did not contain a claim that allowed the Court to rule on Article 2.

Our country has a long history of protecting minorities against the tyranny and oppression from the rest of society. Starting with protection of the former slaves after the civil war, our country has protected minorities based on race, religion, national origin, marital status, handicap, and other categories. Same gender marriage should receive the same protection as other minorities. However, Congress, instead of protecting this minority, choose to single them out to deny them equality under the law.

While our county has a history of protecting minorities, it is the Courts who have protected them when the legislators have persecuted minorities. This is another case where the Courts must act to protect against the tyranny of Congress.

When a claim is made in a court that legislation is unconstitutional, the Court examines the law under long established rules for analyzing the law. The Plaintiffs in this case claimed that the law denied some people equal protection under the law. When an equal protection claim is made, the court must determine if the appropriate standard is the “rational basis” test or the more enhanced “strict scrutiny” test. Strict scrutiny is used if the law could impact a “suspect category”. Suspect categories are classes of people that Congress has declared are subject to discrimination. These categories include race, religion, national origin and other categories. However, sexual preference is not a suspect category. The problem is that sexual preference should be a suspect category.

The Court ruled that there is a an intermediate standard somewhere between rational basis and strict scrutiny. They found that this intermediate standard mandates that the law be found unconstitutional. This position weakens the argument. When this case goes to the Supreme Court, it will be very easy for the Court to find that the First Circuit ruled incorrectly.